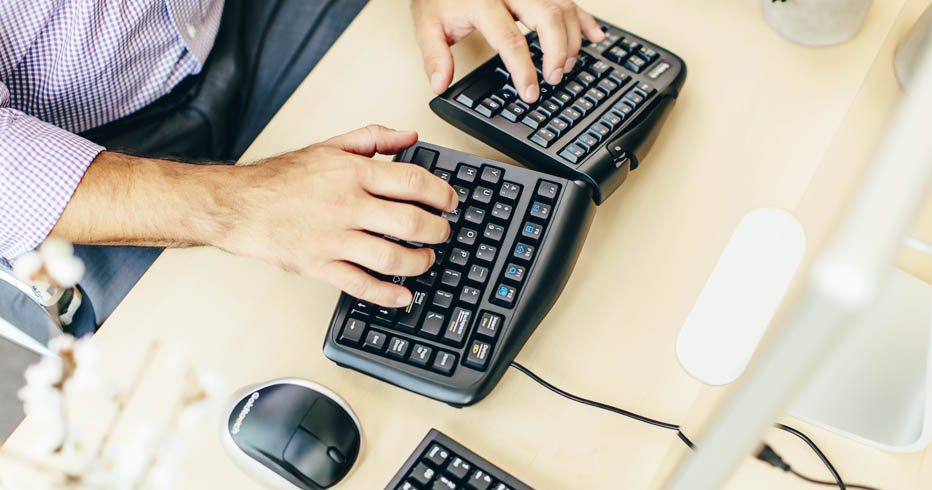 Way back in the Aughts, Human Solution gave you the rundown on the differences between the Goldtouch V2 and Kinesis Freestyle keyboards called “A Split Decision.” While a lot has changed since that glorious and awful decade, including Kinesis’s upgrade to the Freestyle2, one thing hasn’t. We still get this question a whole bunch with regards to which ergonomic keyboard to go with: “Goldtouch or Kinesis?” And the answer is still… "Well, it depends..." Here is an ergonomic keyboard review of both the Goldtouch and Kinesis.

First, let’s go over what hasn’t changed. The big difference between the two remains their methods of height, width and angle adjustment. The Goldtouch V2 Adjustable Keyboard uses a patented locking ball and lever design which allows it to be split and vertically tented anywhere from 0 to 30 degrees. While this means that, unlike the Freestyle2, it can be tented without an accessory, it also means that you can’t completely split the two halves like you can with the Freestyle2 either. And although you have to get an accessory for tenting functionality with the Kinesis Freestyle2, this also gives you more options, including the V3 for simple tenting, the VIP3 for tenting and integrated palms rests, and the Ascent, which allows tenting up to 90 degrees. However, having the tenting feature integrated into the design and the fact that it doesn't completely split gives the Goldtouch the edge when it comes to stability. Also, the Goldtouch has a mobile version called the Go! Keyboard that is wonderful to travel with, and you can even use it as your full time keyboard if you aren't an intensive typist.


Although the major functionality difference between the two is still basically the same, both Goldtouch and Kinesis have made significant changes. Kinesis has updated their Freestyle line to the Freestyle2, which now has a slimmer profile and an inch more separation on the standard split keyboard. The V3 and Ascent accessories still work with the updated Freestyle2, and the VIP has now been upgraded to the VIP3 to work with them as well. 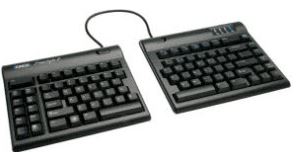 Another big change has to do with Mac compatibility, as both Kinesis and Goldtouch are moving to black only Mac keyboards. Goldtouch is offering the GTU-0088, which is compatible with both Mac and PC and features hot key shortcuts for both. Kinesis plans to launch their Mac-only Freestyle2 in late summer of 2012, and we tended to lead Mac users toward the original Kinesis Freestyle for its intuitive Mac layout, so I'm sure that Kinesis will continue to get the slight edge in this department once the Freestyle2 for Mac becomes available.

Goldtouch vs. Kinesis is a debate that will continue to rage on. However, there is no debate when it comes to a regular keyboard versus an ergonomic one. No matter which one you choose, your body will thank you, as their low force keys, small footprint and splitting and tenting features will almost immediately begin to combat the repetitive stress issues that come with typing. So if you’re still not convinced, or you have more questions as to which keyboard is right for you, be sure to ask one of our helpful experts in live chat or over the phone at 800-531-3746. Or email us at  info@humansolution.com and one of our ergonomic experts will help you find the keyboard that will work best for your needs.