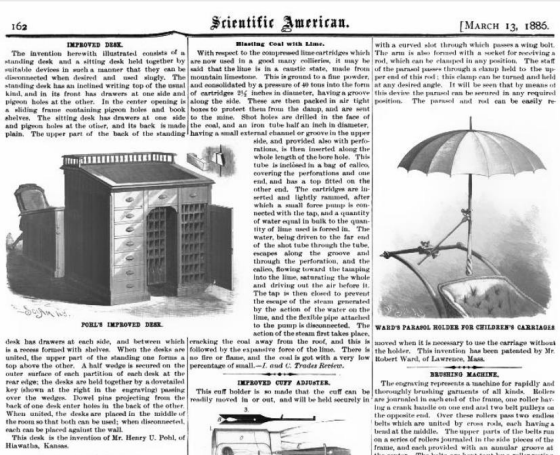 A mid-19th century example of a standing desk, as seen in an 1886 issue of Scientific American.

I've always been something of a history nerd, so after I made plans to visit Boston this year, I figured it'd be a good time to brush up on my Revolution-era American history. Much to my surprise, I stumbled across an interesting fact: Thomas Jefferson was, in fact, a standing desk user, as were other major figures of the Revolution such as Benjamin Franklin. While Jefferson and Franklin certainly aren't the only famous people to have used a standing desk while writing, seeing the standing desk tradition going all the way back to the American Revolution got me interested in learning more about the history behind the standing desk concept.

While the virtues of the standing desk were being extolled by their users as far back as the 1700s, it's interesting to note that the health benefits of standing while working were also pointed out centuries ago. A sedentary lifestyle was known to cause poor circulation and other health issue by doctors even then. In the 1800s, a significant amount of office work was done while standing, but this slowly gave way to constant sitting during the Second Industrial Revolution. A Popular Science article from 1883 made light of the "sedentary habits" of office professionals in the era, and encouraged the use of standing desks and early height-adjustable desks (which the article refers to as "telescope desks") in order to fight indigestion and other ailments associated with prolonged sitting.

Despite this, the 20th century saw a rapid increase of sedentary occupations, with the percentage of jobs classified as "sedentary" or "light-intensity" growing from 52% to 64.4% between 1960 and 1980, according to the New York Times. By 2008, these two categories had surged to make up 79.8% of all occupations. It should come as no surprise that more and more studies are telling us once again what doctors from centuries ago already knew - sitting for too long can be hazardous for your health.

Needless to say, it's time for the sit-stand desks to make a comeback. Unlike the desks of yesteryear, modern height-adjustable desks like the UPLIFT 900 do away with awkward crank-based and lever-based controls, replacing them with a much simpler, more convenient electric control panel, letting you quickly move your entire work surface with the push of a button. It might not be the first thing that comes to mind when you think of working in an "old-school" way, but in a world that's more sedentary than ever, having a height-adjustable workstation might be an even better idea than it was over a century ago.