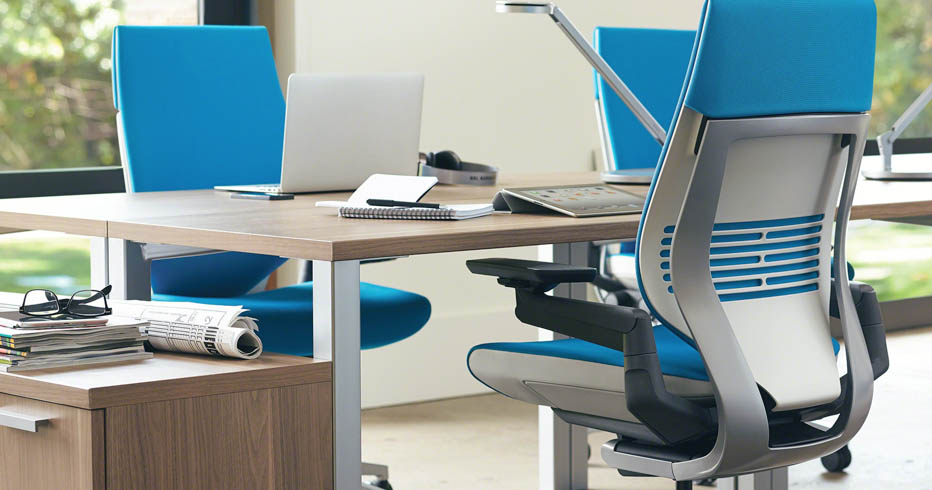 The modern office is changing. Chances are you no longer come in and work exclusively at a desktop computer all day long. With the advent of smartphones, tablets, and laptops, the average office worker finds themselves moving between different postures over the course of the day in order to utilize these new technologies, few of which are supported by traditional ergonomic office chairs.

In response, Steelcase commenced a Global Posture Study spanning eleven countries, six continents, and over 2000 people in various office settings. What they discovered were nine new postures closely related to the use of modern technologies that would cause pain and discomfort if not addressed by a new, purpose-built chair design.

The result was the Steelcase Gesture Chair.

Gesture moves as you move.

Designed to support the human body as it moved, the Gesture's design was built around

four synchronized interfaces - the Core Interface, the Limb Interface, the Seat Interface, and the User Interface. The Core Interface integrates Steelcase's LiveBack technology, which allows the chair back to move laterally, sagittally, and torsionally - in other words, it conforms to each individual user's back and moves with them. A core equalizer system also uses a spring system to adjust itself with the angle of your seat and back, increasing lumbar support when upright and decreasing it when reclined.

The Limb Interface of the Gesture is equally innovative. Like most Steelcase chair arms, the arm pads are made with a soft, cushioned cap that pivots 15 degrees inward and outward as well as adjust forward and back to allow you to sit closer to your work surface when necessary. However, unique to the Gesture is a newly designed arm with 360 degrees of adjustment, offering an unprecedented degree of flexibility with the touch of a button. The Gesture's arms are modeled after the human arm, and thus allow for support in nearly any position, whether you're typing at a keyboard, swiping through screens on your tablet, or sending a quick text on your cell phone.

The Seat Interface, while not as complex as the Limb or Core Interfaces, is equally well designed. A passive seat edge angle flexes under the user's weight, minimizing pressure against the thighs. The seat sides are flexible, making the Gesture ideal for big and tall users as well as those who frequently find themselves "side-sitting." The seat cushion itself is also designed with adaptive bolstering technology - by carefully placing air pockets underneath the seat's foam, the Gesture can offer consistent support for a wide range of users. This multi-user accessibility is at the core of the last Gesture Interface, known as the User Interface. The adjustments found on the Gesture are easily made, and the flexibility of the chair's systems ensure a proper fit for various body types and user needs.

Of course, like all Steelcase chairs, the Gesture is equally suited to "traditional" office work thanks to features like a variable back stop, back tension adjustment, seat depth adjustment, and an optional height-adjustable lumbar support similar to those seen on the Leap, Amia, and Think chair. The Gesture chair can also be ordered in a number of colorful fabrics and frame finishes, allowing you to customize the Gesture's appearance to conform to your home or office the same way it conforms to your posture.

New portable technologies have revolutionized the way that we work and play. Shouldn't you have an ergonomic chair that's as advanced as your mobile devices?

Learn more about the Steelcase Gesture Chair at  TheHumanSolution.com.