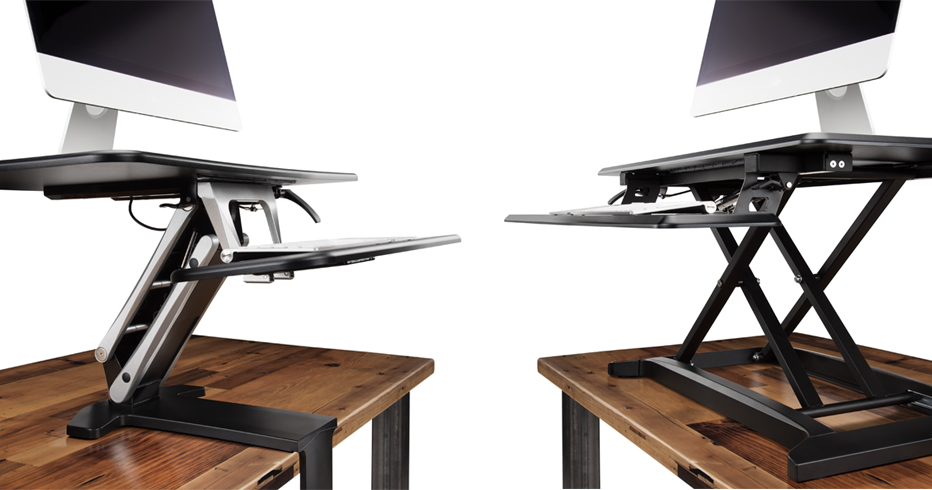 In the day and age of large open offices it’s easy to forget that most small businesses starting out don’t have the kind of capital for that kind of space. These businesses end up taking up residence in small office with limited space and in some cases, built in furniture. There’s nothing worse than being stuck with a desk you hate just because it happened to be attached to the wall like a starving tick. Luckily this is the future and, while there may not be enough space or resources in your tiny office for a full desk upgrade, the standing desk converter is totally a thing.

If you haven’t read our older blogs or visited our website, you’re probably wondering what a standing desk converter is. Fortunately the people in charge of naming these things went with something simple. A standing desk converter essentially converts your old antique desk, cubicle attachment, or horrible office wall table into a height-adjustable sit to stand work station. It’s the next best thing to having a full height-adjustable standing desk and is a perfect solution in situations where you either don’t have space or have furniture that you can’t get rid of for whatever reason.

The Front Clamp Standing Desk Converter by UPLIFT Desk has what are probably the most noticeably different features. It’s very similar to its older brother, the UPLIFT Standing Desk Converter but what you’ll probably notice first is that the Front Clamp Converter has a clamp that clamps in the front. The name kind of gives this one away but there is a point to the design difference. While the UPLIFT Standing Desk Converter was available in either a clamp or a freestanding version, both versions had some inherent shortcomings. The freestanding version was able to fit a variety of worksurfaces with minimal assembly but the keyboard tray platform could only go as low as the desktop which is a pretty common design with most standing desk converters on the market. However, it’s not ergonomically ideal because of the slight raise that the platform causes on the wrists when in the seated position. In that regard, the clamp mount version was the superior of the two, because its design allowed the keyboard tray platform to lower below the desktop surface. However there was more assembly involved with this one and because of the back clamp design, there was some extra adjustment needed when assembling. Basically the freestanding version was better about fitting a wider variety of surfaces while the clamp mound option was a bit better for the ergonomics.

Now that we’ve sung the praises of the new UPLIFT Front Clamp, let’s talk a little about its brother the UPLIFT XF Standing Desk Converter . This model isn’t as dramatic of an improvement but it has plenty to offer. When you pull it out of the box you may notice that there are no tools and that most of the pieces are already put together for you. The reason for this is that the XF does not require tools to assemble and aside from the detachable keyboard tray platform, arrives ready to go out of the box which allows you to get to work right away! The XF also includes a choice of either black or white, again for your décor. Just because it’s an office doesn’t mean it has to be drab. You may also notice a couple of other aesthetic differences from the UPLIFT Adapt X including the fact that there is now only one release switch on the unit rather than two for easier adjustment. The lifting mechanism also now faces forward for a slightly different look. The unit still adjusts straight up and down, from sitting to standing, all within its original footprint. Best of all you now have a choice of either the small size which has a worksurface of 27.6”W x 19.7”D or the medium size which is 34.6” x 20.9”D to better fit your monitors or other workplace gadgets and stationery.

While we’ve improved upon the beloved UPLIFT Standing Converters, they’re not the only products we’ve been working on. New chairs, new desk accessories, and new newness are all in the works and some of these new gadgets and office improvements are closer to realization than you’d think. In the meantime, if you ever have a specific question or just want to get a quote for a great price, you need only contact our amazing team at 800-531-3746.